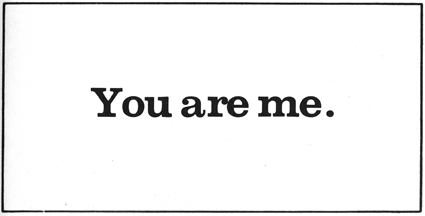 You are me.  Like a note to a roommate left on the refrigerator door, Stephen Kaltenbach sent that cryptic message to the thousands of subscribers of Artforum in December, 1969.  It was the end of a string of anonymous “micro-manifestos” for other artists that he placed in the magazine monthly since November, 1968.

Kaltenbach had encouraged the sharing of ideas as well as lying and starting rumors.  He attempted to manipulate other artists into making their work the way he thought they should do it and when they did – the results were the work of the artist…and Kaltenbach (in his mind).

It is not surprising that Kaltenbach and his unordodox ideas and methods would influence other artists either by direct manipulation or by the excitement that his work generated by the vast concepts and innovative conceptual processes that broke new ground.

This exhibition, YOU ARE ME is a celebration of the act of influencing and being influenced and is manifest in our gallery, ANOTHER YEAR IN LA as a show of Kaltenbach’s conceptual work and work by other artists whose work shares an affinity for and with his.

Some examples of Kaltenbach’s influence are direct as in the Art Works plaques by the reknown funk ceramist, Robert  Arneson and sculptor, Gerald Walberg who used the molds that Kaltenbach left behind when he left for NYC in 1967 to make their own versions of his work.

Many young artists have been induced by his Time Capsules including Peter Coffin who made his own organic version by chrome plating bamboo or Mark Rodgriquez’s New Yorker style cartoon mimicking Kaltenbach’s famous Time Capsule to Barbara Rose (where he invited her to open the work once she felt that he had reached national prominence as an artist.

The exhibition opens November 17 and runs through December 16.

Pictures from the exhibition

(click on a photo below to see a larger image)